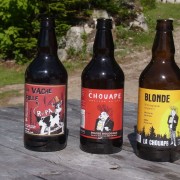 After what has quite possibly been the longest winter either of us has experienced, the thought that we were now driving south appealed to us quite a bit. We realized that we really could use some warmer weather, and definitely could do with a lot less wind. It may have been quite intense and exciting in the North but it also took quite a bit of energy to be constantly exposed to the raw elements, and we both realized that we longed for some summer temperatures.

Another dose of Dust n’Gravel

We were promised (warned) that our drive south would provide us with a nice section of gravel road. We were also told that the road in the northern part of Quebec is really winding and not at all like what we had experienced so far. Super! We thought. We can’t get enough of adventurous roads! Just a few kilometers past the border of Quebec on the aforementioned road we realized that they didn’t promise too much: This road was more the bad type of gravel road… The grader, that usually fixes all the potholes from winter apparently hadn’t made it yet; so the quality went from huge potholes that take up most of the road to washboard that shook the heck out of us and the landy. Just like we were promised, very winding for the entire 80km. Our average speed reached a top 40 km/h meaning 2,5h for the stretch of road. This time we are really happy to have a tar road under us, even if it wasn’t the best. Our thirst for adventurous roads was definitely quenched for today!

Spring – it does really exist!

We drove for some time though an unchanging tundra like barren landscape, then suddenly we noticed something which had become almost foreign to us: Tender green, on the deciduous trees! Yes, there is actually green sprouting, and the farther south we drove the greener it became. The tender green gave way to light green and finally the darker green until finally we saw the green of summer. It took us a while to get used to this almost foreign element in the landscape as though we were driving into another world of sorts. The terrain began to become a lot hillier and the road quality improved. We actually had the feeling of driving through the German secondary mountains; with the exception that here there wasn’t a village or house as far as the eye could see.

At around about the halfway mark to Baie Comeau, the first town after reaching civilization, there is an outfitter with a gas station attached. We were warned about this guy before leaving Labrador City. He uses his location totally to his advantage, and we almost couldn’t believe our eyes as we saw the price for Diesel, the price in Labrador was quite high but we never believed that we would see such prices: $1.82 a litre! That’s Highway Robbery! Thankfully the locals informed us that in Manic 5, about 100 km later, we would find another gas station, and this time with reasonable prices. 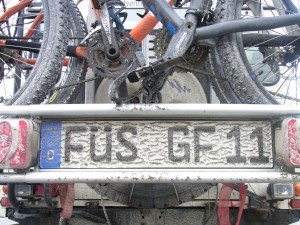 Just after the outfitter experience waited another surprise for us: The awesome tar street suddenly ended into a really worn out gravel road.  Not only that, it started raining and soon the gravel road turned into a mud bath.  We didn’t know how long this stretch would last; we were tired and had just about enough of being jostled about.  The muddy road seemed to stretch on for ever and only turned into tar just before the massive hydro dam Manic 5 (Manic cinq), where we stopped and tanked both the landy and us before collapsing into bed.

After weeks of being on lonely roads our arrival in Baie Comeau came to as a bit too quickly and we needed a bit to get used to it. Not only was there a very drastic change in the climate to deal with we also had to deal with roads that were suddenly full of cars, and people in their hectic daily lives. We drove through one business district to the next and could only stare at all the “consumer temples.” The towns and villages seem to blend into one another without there being any real noticeable beginning or end, something that took us a while to get used to again.

We’ve been travelling for weeks now, sleeping almost every night in the Landy and we haven’t really had a real camp since leaving Newfoundland. We really need a bit of a rest and a place to set up our camp so we decided to go to a campground for a few days. That shouldn’t have been a problem since we were in the tourist area of the St. Lawrence; you can whale watch, go hiking or simply relax along the shore. Perfect, we thought, that is until we found out the average campground price of $30 for an un-serviced spot that wasn’t even nice! We drove from one campground to the next but eventually had to face the hard truth that the days of $15 for a campground were a thing of the past.

Near St. Simeon we found a really nice campground and after looking around we also found the perfect spot with beautiful views of the St. Lawrence. However, we were a bit saddened when we found out the price but after seeing our long faces the campground owner decided to give us a small break on the price so we decided right then and there to stay 4 nights. We needed the break, we also desperately needed to do laundry, clean the thick mud that had collected on our bike chains, and clean the dust from the gravel road that seemed to have found it’s way into every nook and cranny.  Gary got the Potjie out and made a yummy stew over the campfire, the cast iron bread form finally got some use again and we tried a few of the excellent Quebecer microbrews.

The St. Lawrence is known for its abundance of whales that either stay all year or visit on their migratory route, especially near the Saguenay river. The Belugas were especially prevalent and could be seen swimming in pods from along the shore. We also got to see our first whales here along the St. Lawrence. On an already wonderful evening with almost perfect sunset a larger whale (Probably a Minke whale) passed right along the shoreline past our camp. Gary, who has a good sense for such things (without him I would have missed quite a few things), heard the breathing noises of the whale from quite a ways off and brought my attention to it, we heard the noise in regular intervals get closer and closer until with a loud blow it surfaced directly in front of us. A great experience to say the least! 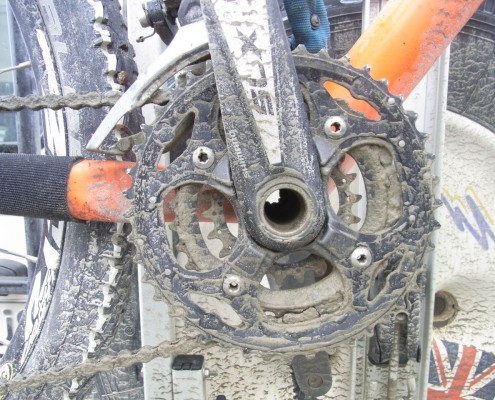 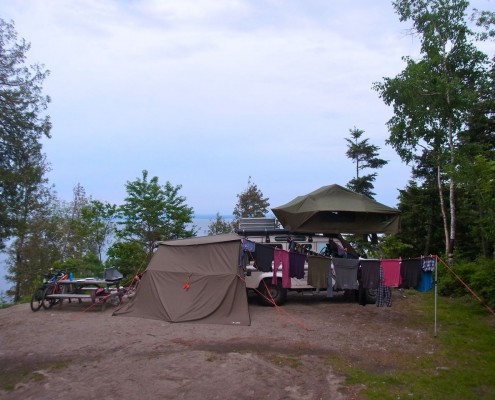 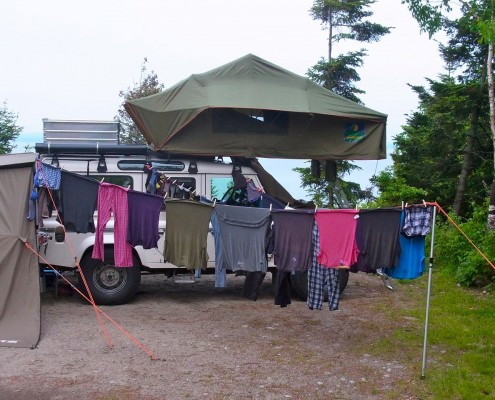 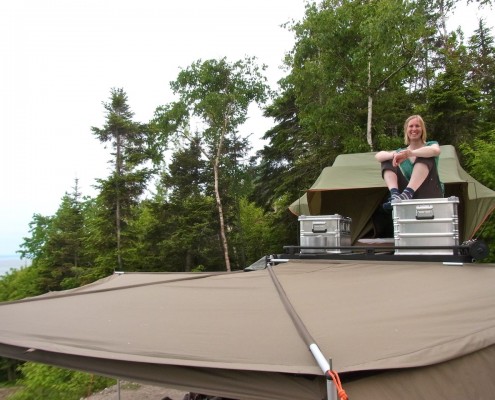 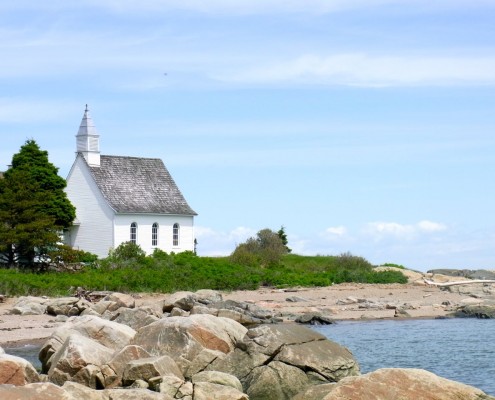 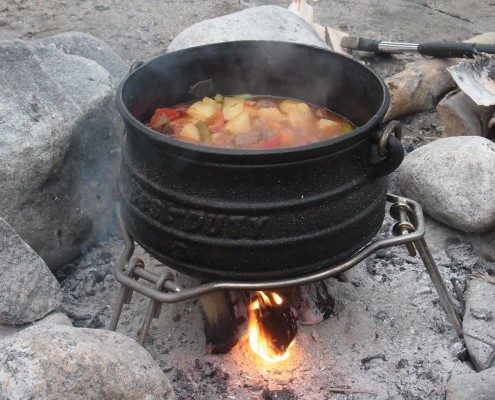 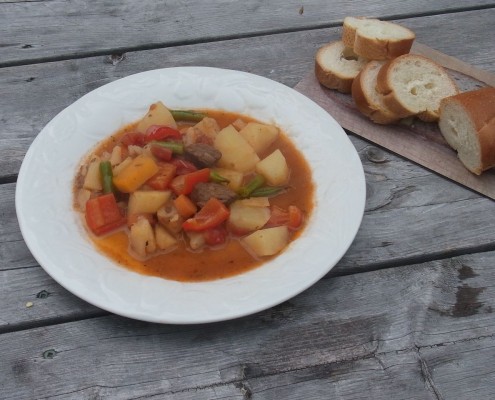 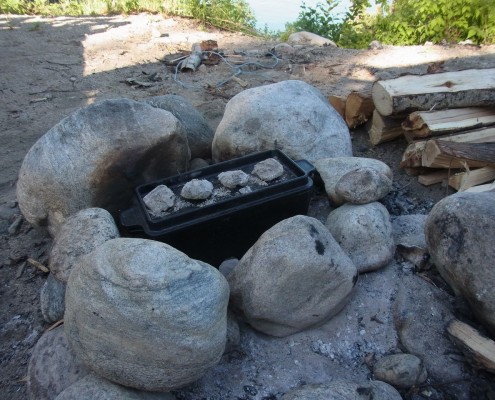 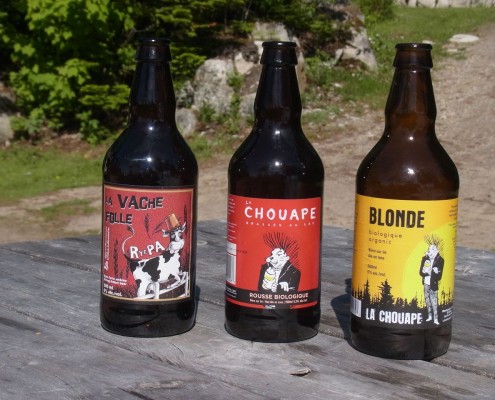 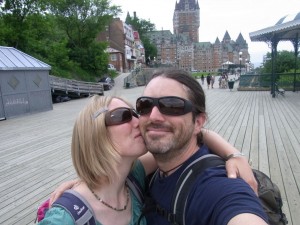 Vieux Quebec is a romantic city – at least that was what everyone was telling us. So of course we needed to visit it. Besides we were passing right by it anyway, the only thing was how we are going to go about visiting the city. We aren’t exactly set up for city visits. We don’t fit in any city garage, and we aren’t really all the comfortable with leaving the landy with all our stuff in it and our bikes on the back just anywhere. Even if we were to go to a city hostel the problem with parking would be the same. There are also city campgrounds but we aren’t at all keen on that idea, so we decided that we would leave very early in the morning, park as near to the old town as possible, and leave in the evening. As it so happened that turned out to be a really good solution.

The old town really is romantic. We strolled hand-in-hand through the old, almost European, alleys and the wooden terrace promenade by Chateau Frontenac. We spent the day with strolling, eating ice cream, photos, lots of kissing and all those other things that normal people do on such a city stroll. A really nice change of pace to the whole outdoor nature experiences we think. 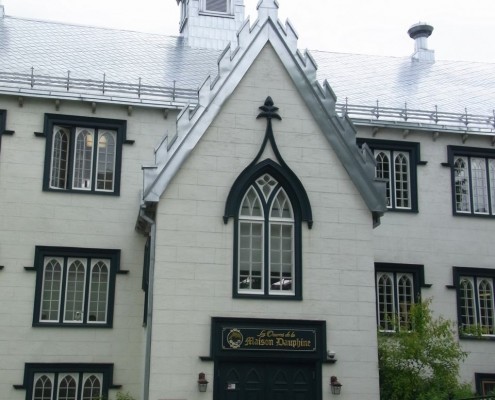 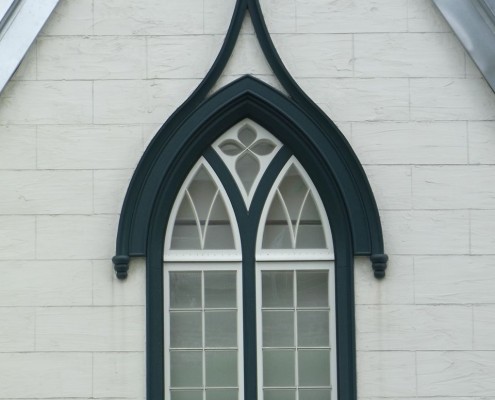 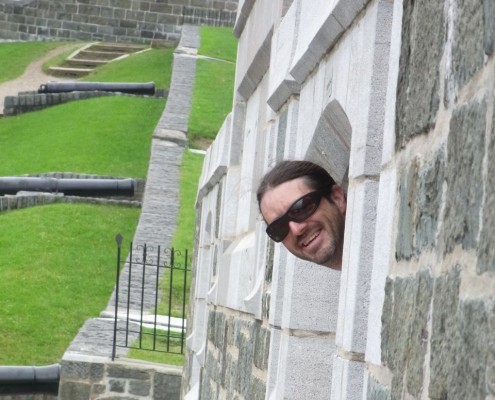 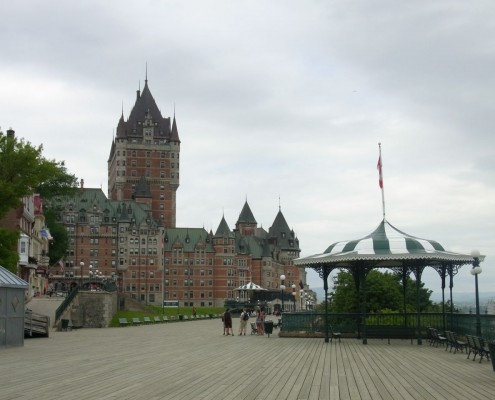 We found a nice natural campground not too far from Quebec city in a type of regional park and they even had prices we could afford! We actually only wanted to stay the night after our city tour and then continue on, but to our great joy we discovered a small sport climbing area in a ravine at the campground. So we packed out our climbing gear and headed off to the area hoping that we hadn’t forgotten how to climb. We conveniently ignored the sign informing us that the area was only for members of the Quebec climbing club – our French is terrible anyway and it probably said something completely different… It was awesome to finally do a bit of climbing again especially at such a nice spot. It felt good, and of course a bit of exercise too – apparently we had put on a bit of winter fat in the north. Not surprising really our cookie input was inversely proportionally to the temperature… the lower the temperature the higher the number of cookies ;) 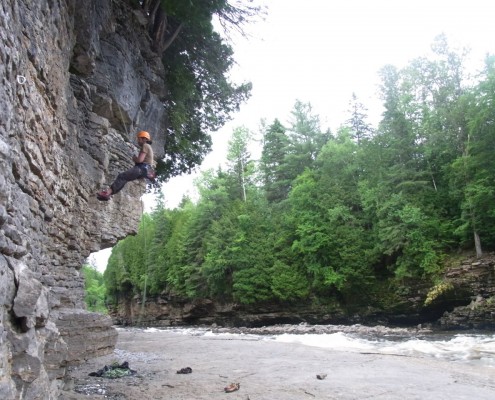 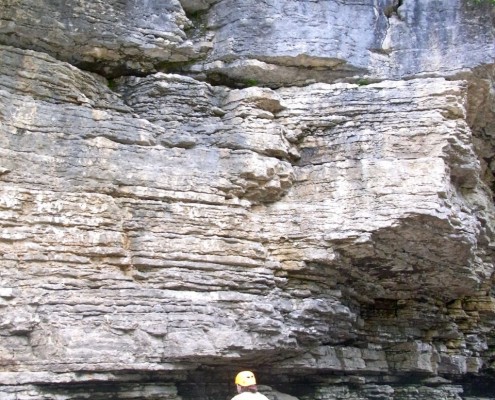 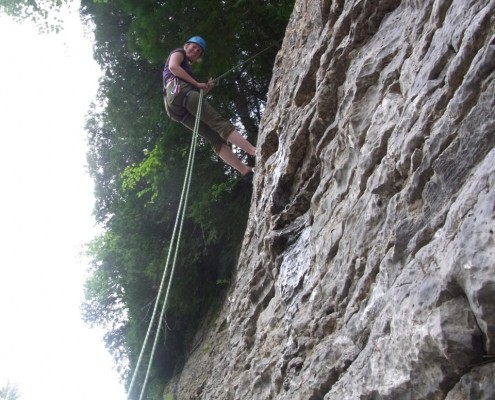 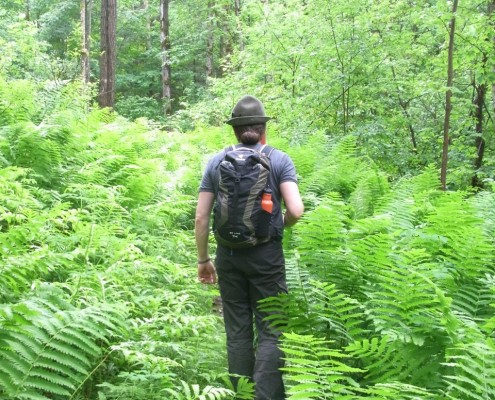 “The Buffet is open!”

One of the things, that we seemed to have been spared from, were mosquitoes. We had a few run-ins with Labradorian mosquitoes recently. They seemed to be quite hardy little buggers and had no problem flying about in temperatures around the 10C mark. It was probably a good thing to drive through when it was still relatively cold since these mosquitoes can be quite scary. They are over twice the size of other mosquitoes that we had seen so far and they seemed to cause, at least with Gary, a type of allergic reaction with some impressive swelling.

So upon seeing the first mosquitoes in Quebec our first thought was “cute.” In comparison these things looked completely harmless – but looks can be deceiving. They started to get on our nerves pretty quickly and had the feeling that someone had shouted out that the buffet, in the form of two fresh tourists was now open. The mosquitoes were definitely a lot worse than most of the areas in Europe. Things like citronella didn’t seem to faze them. They seemed to avoid the candle but that was probably more to do with the flame than the smell. Direct sunlight didn’t seem to reduce their numbers either; I was used to being left relatively alone when the sun was out but in Canada that wasn’t the case. Gary, who knew from first hand experience, sprayed himself really heavily with our insect spray. I was a bit hesitant spraying myself with the 30% DEET (which is outlawed in Germany) so I followed the directions and used it sparingly – with the result that in just two days I had over 40 (I counted them) itchy bug bites. It seemed the little buggers had it in for my feet as that is where I got the most bites, it looked like I had some kind of contagious disease or something. To hell with “sparingly” from then on I  sprayed it on thick!

We spent a couple of really nice (with the exception of the mosquitoes) days by the ravine before we continued our journey west. With the hot summer weather we decided to take the Highway to put a few miles behind us; we even managed to reach the Ontario border that same day. 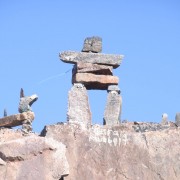 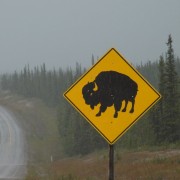 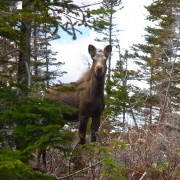 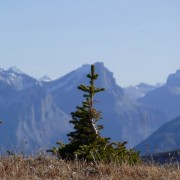 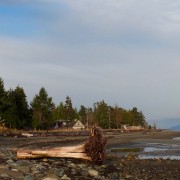 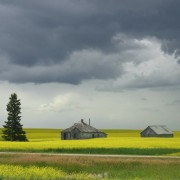 Dawson City – “Not the worst place to be stuck”
2 replies